I’ve gotten to the point where My disappointment with people in the MLM Industry, has made me more and more ‘reclusive‘ – it’s sad to say this but, The more I network with networkers, the more I find people who are … asleep.

I’ve had so many people come to me; Express great interest and fondness for Our One MLM System – who then go on to try and ‘make their own versions’ – without fully understanding any of the principles that it takes, to make something like this work. But, I guess that would require people being ‘awake’ in order to realize that they do not know, what they do not know.

Together Everyone Achieves More – but most networkers do not seem to know that.

If they did, more would be doing it. More of them would have decided to work ‘together’ under one banner; growing this organization together – so that we could all learn, and teach these principles; and create a large enough ‘team‘ – to where our Team Leaders could always branch Off later; create their ‘own systems’ – with their ‘own programs’ – because, by that time they’d already fully understand and embrace that, it’s Not About the Programs. The team really does matter more than the company. However, if these networkers knew this, they’d be doing this.

Whoever decides not to roll with us; it’s whatever – Our system will simply continue to improve, get better, and We’ll attract more and more of the right people.

The people who are supposed to be rolling with us – are.

The ones who were supposed to come, and compliment, only to go off and ‘do their own thing’ – did.

The ones who sign up as ‘leads’ and never unlock their systems, were always going to do that anyways….

There’s unlimited earning potential in the MLM opportunities On the planet today – and anyone saying that it’s not wise to develop Multiple Streams of MLM Income – is giving you Unwise counsel. Look around, and look into wealth. Study the subject – what you’ll find are countless examples of people who are making money in more than one place – OFTEN Within the same industry; In other words, there is a such thing as owning Two Hotel Chains, within the Hotel Industry; having Two Music Record companies, within the Music Record industry; there is a such thing as owning more than ONE house, with in the real Estate Industry – so anyone suggesting that you and I cannot earn money in MORE than one MLM company is not only uneducated about wealth; they are simply talking from an ‘agenda’.

And we shall Let em’ Sleep – they can continue to think that they can push that agenda on us….

We wouldn’t be ‘leaders’ though, if we followed that misdirected advice.

We are here, for the people ….

You’re either with that mission; or you’re not.

And the way we understand it, it always goes, the way it is supposed to go.

Want to see how DEEP this rabbit hole goes?

Watch our special presentation ‘ FREE YOUR MIND ‘ – for blue pills only ….

Check out our 3 year Anniversary Recap for the 1mlmsystem To Rule Them All  — lots of nuggets and Valuable information contained inside this Webinar; Take notes! Especially if you are one of our leaders, helping in the expansion and GROWTH of our movement; to help more people make more money in the MLM industry… Please understand, everything we’re doing here is ‘grass roots’ – and we are thankful for all who’ve come, who’ve gone, and especially who have stayed. We’re Excited about 2016 – and we have no problems with those who are Not part of what we are about to do. Let Em’ Sleep! – let’s get it! 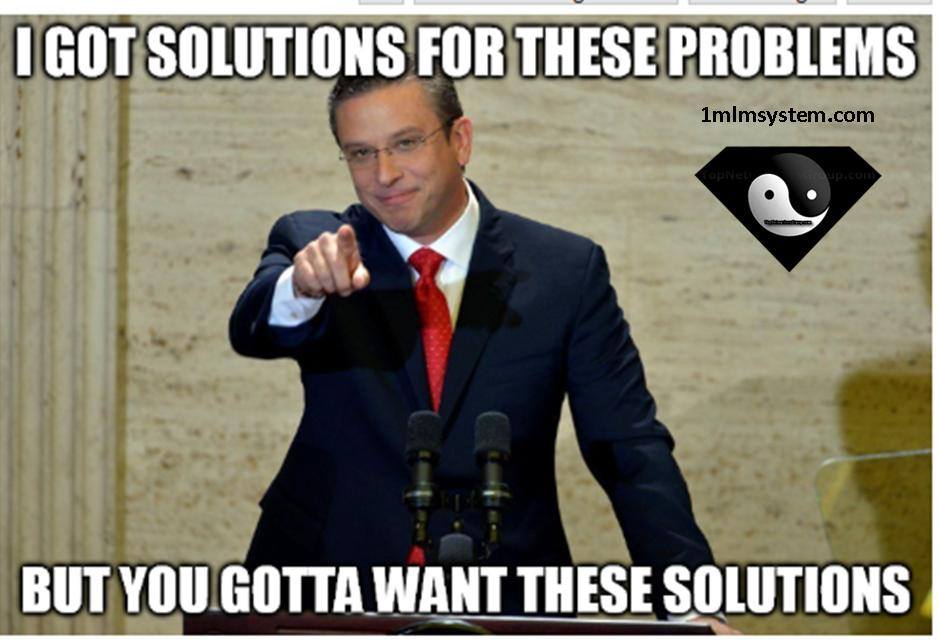 Click on this picture “Solutions for these Problems” – to see even more of what We’ve had to say about everything you’ve read about in this article. We Do have solutions but, we’re not going to try to talk people into doing anything they do not want to do. We’re going to go ahead, and Let em’ sleep in 2016 …

Taking A Moment For Attention …

I’ve never been shy about talking about topics that are not always popular. Sometimes as a society we just go along with stuff. Some of the things we go along with in my opinion become harmful to us as a society; and The conversation around attention is one of those areas.  Today it is widely accepted that a condition many Americans are diagnosed with is in fact, a real condition. Attention Deficit Disorder and Attention Deficit Hyperactivity Disorder have taken quite a toll on Americans in the past 2 decades.

I was listening to an interview about a year ago, with an author of a book On this very subject.  In his book, the author suggests that this diagnosis of ‘attention disorder’ is actually just a ploy to make more money for pharmaceutical companies. Anyone who follows this topic might actually see where the author of this book is coming from.  There are many who say that the US knows about cures for cancer but, companies that get Paid Billions of dollars creating medicine for Cancer patients simply do not allow Americans to take these ‘cures’ seriously.

This is where our conversation … Taking A moment for Attention … begins.

I shared some thoughts on my Facebook today; and subsequently on my TSU and Twitter; in regards to Attention.

It’s a way of helping people help themselves by asking them to turn off those distractions. However each person STILL has to choose to do it. In the old days we’d be at the hotel meeting and people still had their phones going off even though we suggested turning them off – or putting them on silent. Sometimes the distraction is so sudden that we Involuntarily Choose to tune IN to it; which is why we make that suggestion.

If you’re serious about business; this suggestion is not “just” for suggestion.

Really and truly… Turn off ALL distractions; CHOOSE to pay attention.

I mean… you DO want this residual don’t you?

Is it a Choice to pay attention or not?

Anyone who’s been diagnosed with ADD or ADHD will adamantly tell you that they have No choice in this matter.  Many, after so many years of using these medicines are so dependent on them that they’ve come to believe they NEED the medicine to survive. Again, there are two schools of thought in society today. One school examines the reality that Pharmaceutical really are making Billions of dollars per year from medicines which often, do not make people better. In fact, several of these medicines cure one ailment but then create another, causing a patient to have to get yet another medicine for the new ailment. This is happening in our faces and there is another school of thought, which ignores these facts entirely.

So, when I made a VIDEO about Attention – based off the Radio Interview I just heard with author of ADHD Does Not Exist, Dr. Richard Saul – talking with Radio Host Lisa Ann Walter (the actual interview was removed from the site when she left the station….) – Lots of people got really upset with what I had to say; and I had to disable comments.

Most people just don’t want to hear that they’ve been duped into buying drugs, and may now be Hooked on drugs – because the system they believe in so much; Lied to them.

Usually, those two schools of thought I referred to earlier – also are divided on this issue as well. Those who believe Big Pharma is leading people on for profits, do not believe it’s far fetched that our System would allow this to happen. Those in this school of thought have seen it happen so many times before. Those in the Other school of thought, refuse to believe anything other than the mainstream media narrative.

The reason for this is simple.

The matrix has them.

Set aside One Hour of your time “With No Distractions” So you can pay full Attention to our Presentation entitled “Free Your Mind” – which talks about The Matrix; and even how network marketing can be used as a ‘red pill’ to wake people up from the dream world they are in…

Just as people are lied to by Big Pharma, so many other Systems of our ‘system’ Lie to the people – to keep the people under control.

If you’ll CHOOSE to pay attention long enough; You’ll fully understand what I mean when I say this.

Watch “Free Your Mind” – Presented by TopNetworkersgroup at 1mlmsystem.com – NOW!

My Controversial Video on ADHD –

A couple of books I referenced ::

There are also tons of videos and articles out in the Universe which speak on this topic as well. Why I chose to speak on it is simple. In today’s day and age, ‘paying attention’ is more important than ever. Especially if you’re a network marketer.  There is So much vying for our attention – and not everything deserves our attention. Coming up in this industry, listening to master Teachers like Brian Tracy speak on topics such as “Time Management” let me know early that ‘attention is a choice’ – we have to CHOOSE to pay attention.

I can remember being in school where I was notoriously a BAD student. After a conversation with a girl I was dating at the time, I came to realize that I was not CHOOSING to focus.  I would allow myself to day dream, to zone out during class. I made no real effort to bring myself ‘back’ to class.  Just something about our conversation one day, made me realize that this was happening; and without giving away how ‘old’ I am; NO one was talking about ADHD then.  So needless to say, I’ve never taken any sort of drugs/medication to pay attention.

You may not agree with me, or Dr. Richard Saul; or several other experts who’ll tell you that you’ve been duped –

But as the old saying goes; Don’t shoot the Messenger.

If you’re working in business; especially in the network marketing industry … you MUST pay attention when a presentation is taking place.

You must eliminate distractions and pay Full attention to the videos; the trainings; the live seminars you’re at, when you’re at them.

You cannot make excuses for your attention span; YOU must ‘grow’ and ‘get better’ and work to ‘improve’ your attention span, ‘if’ it’s not where it should be. You must do things like, eliminate distractions; Turn off televisions, radios, phones, and anything that might Disturb your focus, Do what it takes – because that’s what your competition is doing….