TSU Closes down leaving several people who were excited about the social network disappointed!

In case you have not heard by now, On the first of August 2016, the CEO and Founder of TSU, Sebastian Sobczak announced that TSU would be closing down.  Folding up its’ operations at the end of the month.  As TSU closes down you can garauntee that I had plenty to say about it. But I decided to keep most of my thoughts short and contained – and ‘may’ share a bit more later.

My thoughts on TSU closing down. Amy business can go out of business. 1mlmsystem.com

Any Business Can Go out of Business.

That idea is one of the founding principles of TopNetworkersGroup.com – I started this company, this team, and this organization after realizing that we are indeed, at the beginning of the 5th Wave of Network Marketing. You can read all about that in our blog. The industry of network marketing has evolved to a very exciting point – there are literally an unending stream of ways to make money. There are a lot of decent companies and yet, this founding principle remains ever true. Any business can go out of business.

As TSU Closes down I am reminded of the general business statistics that you’ll find if you look them up. Most businesses do not make it past the first 5 years. In fact, 90% fail.

Out of the 10% that are able to make it out of the first 5 years – only 5% of those businesses make it to a full 10 years in business.

This makes building a stable income within network marketing very difficult to do, when we consider the landscape.

On one hand you have your more ‘established’ network marketing companies that have been around past that 10 year mark. The likelihood that they’ll be around for another 10 years is very high.

But, the ‘saturation myth’ is heavy in these companies. In many cases a lot of people have heard of that opportunity; but there are always people who have NEVER heard of it. However, this ‘mental obstacle is difficult’ for many people to overcome.  This is what keeps people So interested in these brand NEW opportunities. Companies that are in pre-launch are what’s considered to be, below mud level opportunities. They’re not even ground floor yet. The common belief in business is that you want to be in, on the ground floor.

Business people with experience however, know that this isn’t always beneficial to you as a business person. Sometimes being in early is great; other times it’s not so great and hopefully the company will be around long enough for you to recoup your investment.

As TSU closes down the ‘good thing’ here is none of us invested any money.

Some of you invested, way too much time though.

I feel that the handling of tsu’ssocial network was poor on behalf of the staff. They had a great idea but did not really invest the time/resources in ‘teaching people’ how to use their social network. Far too many people were literally liking and sharing posts, just for the sake of liking and sharing posts. People were commenting ‘nice’ on posts, that sometime were not nice subjects. People were doing this because too many of them were under the impression that they were being paid ‘per like’, ‘per share’ and ‘per comment’.

This misunderstanding, in my mind is the primary reason that we’re now here, discussing the fact that TSU closes down in LESS than 2 years of operations. The social network launched in *November of 2014;  and didn’t even reach the END of 2016 – before announcing that it would be shutting it’s doors. They’re allowing us to ‘download our content’, but as TSU Closes down, what’s happening to all the money they owe people?

Money was generated by each user, just for being on TSU – I’ll list some of the resources I created ‘for’ TSU which contain some valuable information on ‘business in general’. it’s important in this day and age, as a marketer to understand how money is generated from ad-revenue boxes – especially since the Smart marketers like ‘you’ are employing them on your blogs and websites ….

Some Videos from TopnetworkersGroup on TSU:

I wrote about issues TSU needed to listen to; In Ello NSFW Email Is Big News – TSU Better Listen – I talked about how there were some tolerance issues that TSU needed to ‘ease up’ on for the network to survive. The censorship issues and the fact that people were willy nilly with reporting other members helped drive away the people who were contributing content.

I made this meme because of these ‘social media post nazi’s’ who were reporting anyone who posted what they didn’t want to see – rather than simply block, or unfriend people. 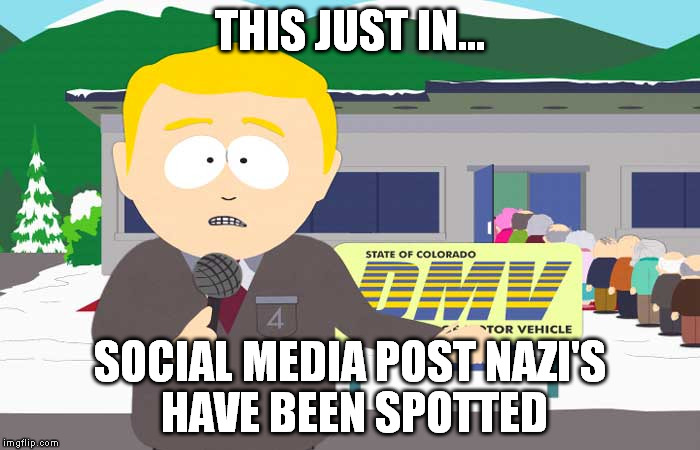 That, along with far too many users posting photos, and photos, and photos, while ignoring ‘real world issues’ that typically bring people together in the first place. The reason FB is so popular is because, people post Everything on that network; Literally everything – even some things that we as a society deem Unfit to be seen; and occasionally of course, depending on HOW unfit it is, FB lets people share what they want to share.  (with a few exceptions of course) – and that’s what helps FB grow. People have ‘space’ to do their thing and can connect with like minds. They can even debate and argue on ‘the book’ and that’s what other networks like twitter, instagram, and … you know, successful social networks do.

For example: people would get into ‘fights/disagreements’ on the TSU and suddenly their ‘account’ is closed or deleted. The money they made on TSU, gone. The time they spent on TSU, wasted…. As  TSU closes down, all of us can relate to people who found their accounts removed.

Fights happen on ‘social networks’ though and it helps keep people ‘engaged‘ – whether we care to be honest and admit it or not – which brings people back to the site; which generates money…

They didn’t take the censorship issue seriously, the lack of quality posting or interaction seriously, nor did they allow people the freedom to have their own ‘space’ to share what mattered to them without being harassed by other users –  and now, TSU closes down while Ello continues to … peddle along.

But, as TSU closes down many of us ARE asking that question and perhaps MORE of us need to. What happens to all the money they owe people who didn’t reach that $100 cashout?  Was there a clause we missed that stated they do not owe us our money if we didn’t hit that mark? Or just that they’d only SEND money to us if we hit that mark? Hopefully we can get some answers. If the agreement was that they’d only ‘send money’ to us, that stipulates that they are In business, and sending out checks. Going out of business though, to me it seems would almost invalidate our agreement and puts TSU on the hook, for quite a bit of money. Even if it’s .03 – someone generated money FOR TSU, for them to be owed .03 …… I feel it should be paid.

Do YOU feel TSU should pay ALL of it’s users?

Sound off in the comments; pass this article around – and see who all feels the same way!

Also, consider how ‘stable’ your income would be if you had enrolled your TSU referrals into ‘more’ than JUST TSU. We recommend people take a more professional approach to the network marketing and affiliate marketing industries. Let’s  Learn how to do things ‘The Right way’ as we move into the 5th Wave of Network Marketing. Thanks for stopping by!